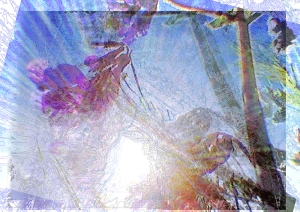 “Well, the youngsters here will be all the fresher for school when the summer gets over and they have to go back again.”

“School?” he said; “yes, what do you mean by that word? I don’t see how it can have anything to do with children. We talk, indeed, of a school of herring, and a school of painting, and in the former sense we might talk of a school of children—but otherwise,” said he, laughing, “I must own myself beaten.”

Hang it! thought I, I can’t open my mouth without digging up some new complexity. […] so I said after a little fumbling, “I was using the word in the sense of a system of education.”

“Why not old people also?” said he with a twinkle in his eye.

“But,” he went on, “I can assure you our children learn, whether they go through a ‘system of teaching’ or not. Why, you will not find one of these children about here, boy or girl, who cannot swim; and every one of them has been used to tumbling about the little forest ponies- -there’s one of them now! They all of them know how to cook; the bigger lads can mow; many can thatch and do odd jobs at carpentering; or they know how to keep shop. I can tell you they know plenty of things.”

“Yes, but their mental education, the teaching of their minds,” said I, kindly translating my phrase.

“Guest,” said he, “perhaps you have not learned to do these things I have been speaking about; and if that’s the case, don’t you run away with the idea that it doesn’t take some skill to do them, and doesn’t give plenty of work for one’s mind:[…] But, however, I understand you to be speaking of book-learning; and as to that, it is a simple affair. Most children, seeing books lying about, manage to read by the time they are four years old; though I am told it has not always been so. As to writing, we do not encourage them to scrawl too early (though scrawl a little they will), because it gets them into a habit of ugly writing; and what’s the use of a lot of ugly writing being done, when rough printing can be done so easily. […]

“Well,” said I, “about the children; when they know how toread and write, don’t they learn something else—languages, for instance?”

“Of course,” he said; “sometimes even before they can read, they can talk French, which is the nearest language talked on the other side of the water; and they soon get to know German also, which is talked by a huge number of communes and colleges on the mainland. […]

“And history?” said I; “how do you teach history?”

“Well,” said he, “when a person can read, of course he reads what he likes to; and he can easily get someone to tell him what are the best books to read on such or such a subject, or to explain what he doesn’t understand in the books when he is reading them.”

“Well,” said I, “what else do they learn? I suppose they don’t all learn history?”

“No, no,” said he; “some don’t care about it; in fact, I don’t think many do. I have heard my great-grandfather say that it is mostly in periods of turmoil and strife and confusion that people care much about history; and you know,” said my friend, with an amiable smile, “we are not like that now. […] will spend time over mathematics. ‘Tis no use forcing people’s tastes.”

Said I: “But you don’t mean that children learn all these things?”

Said he: “That depends on what you mean by children; and also you must remember how much they differ. As a rule, they don’t do much reading, except for a few story-books, till they are about fifteen years old; we don’t encourage early bookishness: though you will find some children who WILL take to books very early; which perhaps is not good for them; but it’s no use thwarting them; and very often it doesn’t last long with them, and they find their level before they are twenty years old. […]

“After all, I don’t know that it does them much harm, even if they do grow up book-students. Such people as that, ’tis a great pleasure seeing them so happy over work which is not much sought for. And besides, these students are generally such pleasant people; so kind and sweet tempered; so humble, and at the same time so anxious to teach everybody all that they know. Really, I like those that I have met prodigiously.”

In “Νews from nowhere” William Morris relates the story of a friend that fell asleep and went through surprising adventures. During his dream the protagonist is going back to his country, England, where undergoes a strange experience of foreignness. England is a place of freedom and genuine equality between men, women and children.

I would like to continue the dialogue and imagine the foreigner asking  “And how these children learn to draw?” and etting  the answer, “By drawing…”

William Morris – beauty and anarchy in the UK

for pedagogy, freedom and imagination.